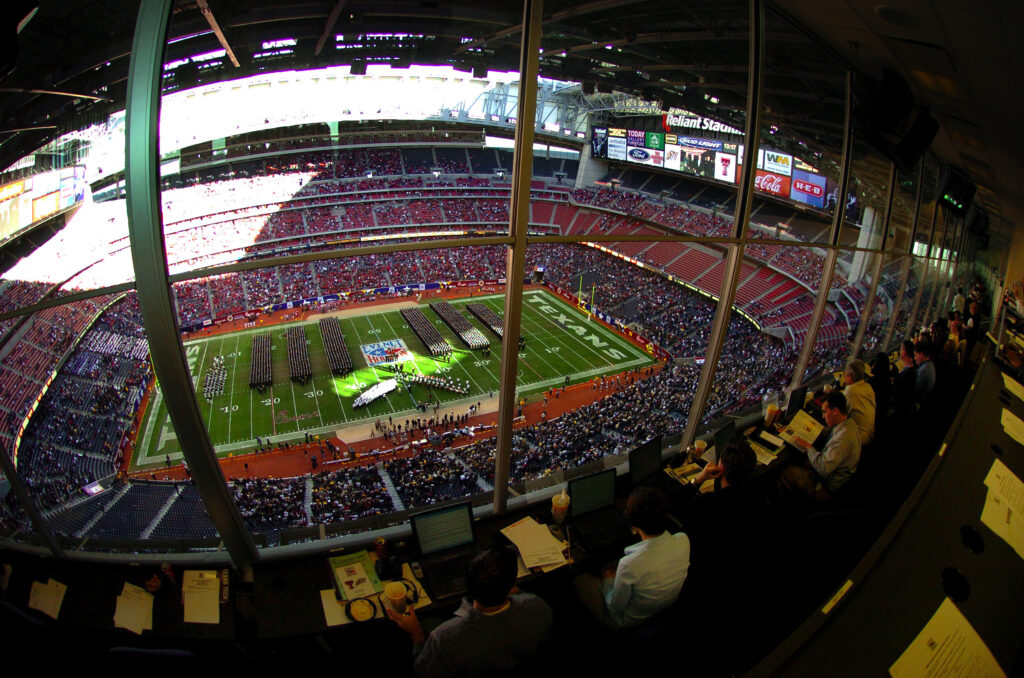 Using Tick Charts To Listen In On Institutional Traders

Sunday afternoon. Playoffs are looming and your team is knocking on the door towards mid-field. To stand a chance you desperately need a first down – and then something. A touchdown is too much to ask for – but a field goal will seal the deal.

Inevitably at this moment, the cameras always seem to pan to the skybox – where the opposing team’s defensive coordinator is sitting with his team plotting your total annihilation. Protected from the noise of the crazed fans, he looks at his play sheet and a sly smile crosses his face. His coordinators nod in unison – those devils have their play. Oh, to be a fly on that wall in this moment!

Every day, in every market – a smile creeps across the face of an institutional trader as he or she plots their move. You can use tick charts to help monitor their volume and the plays that they’re running – so you at least stand a chance.

The guys in the skybox driving your market

It was Buddy Ryan who said that ‘QBs are overpaid, overrated, pompous (insert a word that start with ‘b’ here) that must be punished…’ The famed defensively-minded coach would go on to win two Super Bowls and have two children – both of whom are coaches in the NFL – Rex and Rob Ryan. Read any quote from Rex or Rob and you’ll find that the apple(s) didn’t fall too far from the tree.

Like a coach calling a play – you can assume that any price move is being driven by a small group of institutional traders – sitting in their skybox equivalent.

Not knowing what they’re up to, or where their heads are at, is a great way to get yourself on the wrong side of price – and overrun when it counts most. Fortunately, you have tick charts as a means to tell you what they’re up to and where they’re driving price.

Your personal frequency for any market move

If you’re watching the booth or the sidelines during an NFL game, you’ll see the same headsets on both sides. These are used to handle all communications between coaches and are standard and supplied by the league for every game. You may recall the controversy during the Steelers / Patriots game a few years ago when the headsets went down.

The market has its own ‘headset’ equivalent in the form of tick charts, and you can use them to listen in as long as you know what frequency to use. Tick charts are different from other charts in that they track contract volume over time – instead of price.

Tick charts can be set to determine how many ticks will appear within each candle timeframe. A 1,000-tick chart will move from one bar to the next every 1,000 ticks. When volume is high, the bars will appear in rapid succession. For high-volume markets, making sure that you have your tick chart set properly is critical. In many instances, you need to make sure that they’re set high enough to accommodate the volume, but not so high as to miss market moves.

Note the differences in how price swings appear between your standard 7-minute chart, the 200-tick chart and the 1,000-tick chart.

For the ES during this time frame between 500 and 1,000 ticks per bar seems to accentuate the pricing move that’s being made.

Balancing run plays with pass plays, while keeping a defense guessing, is one of the biggest challenges faced by offensive coordinators. Second down is said to be the best opportunity to run a random play with the highest probability of success. After that, 3rd and 4th downs are statistically very predictable based on the yardage that the offense is dealing with.

Using a tick chart view, you can start to predict a market’s move – simply by watching the volume (or number of ticks) going down over a period of time in relation to where price is headed. You’ll know if the institutions are heating up in one direction or another – if tick/contract volume is accelerating.

Looking at the example here, you can see the concentration of tick volume as institutional traders put their foot on the gas. When they made this move – price went up. Watching this in the early stages would have provided the opportunity to get in early – taking advantage of the price move.

Just as though you’re about to hear the defensive coordinator get ready to blitz and defend the run – so that you can go with a pass play.

Why ignoring institutions is a surefire way to lose

Many armchair quarterbacks and NFL coaches have tried to decode defenses (or offenses) with horrible results. Many speculators would argue that no one really knows – and if you’re across the field from Bill Belichick – you most certainly don’t have any idea what’s going to happen.

Those who argue that there’s no way to determine what an institutional trader is in the process of doing may be overlooking the volume that these traders drive. If you accept that these players in fact drive 90% of the market’s volume – then you also have to deal with the historical support and resistance levels this volume creates – which can’t be ignored during any price movement.

These volume levels serve as the foundational starting point for reversal entries. Since ticks are a reliable, empirical view into volume – then they can’t be ignored, especially when they accelerate during a short period of time, driving price.

Take your seat in the skybox and score

The best defense in the league this year is the Baltimore Ravens. If your team faced them on third down, odds of conversion was less than 30%. So far they’ve allowed a league-low average of 4.9 yards per play and just over 17 points per game. Twelve games into the season – talk about stifling.

You can beat Ravens-like institutional defenses and convert more than 30% of the time simply by watching the tick chart. Keep an eye on the number of contracts picked up, relative to a particular period of time. For instance, when buy contracts accelerate on a 1,000 tick chart – you know that price is on the move. The same is true on the sell side.

Don’t wait until you’re at the line of scrimmage to call your play. Watch as the players take the field, knowing full well what the guys up in the box have decided.

Trade with the trend, take your first down and go on to score.