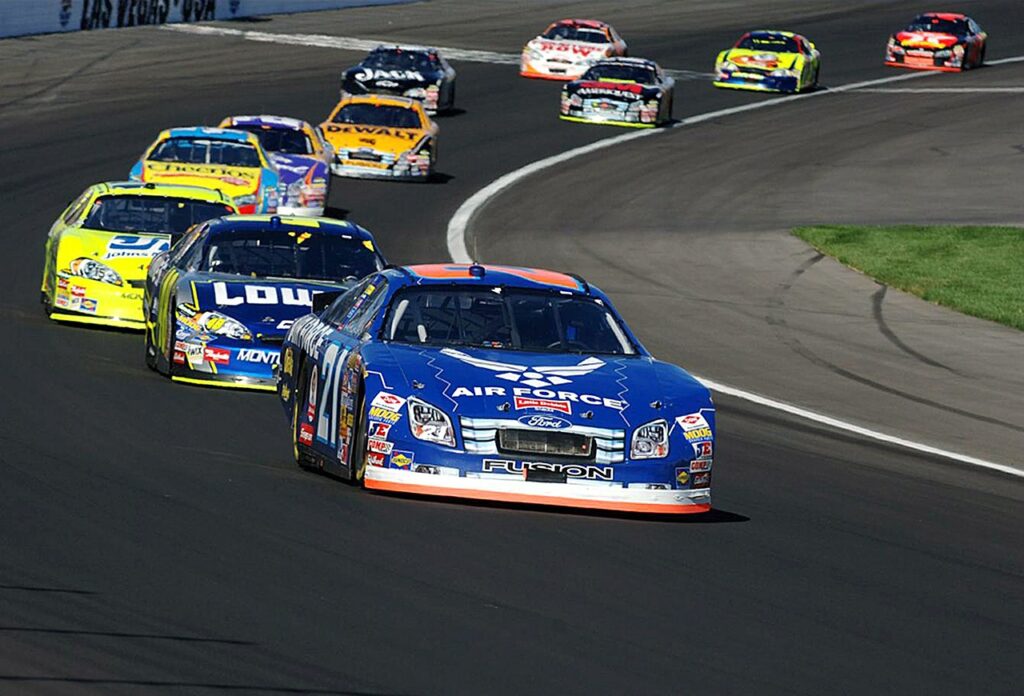 Hairspray, gasoline, roaring engines and a heart-stopping finish. It’s May 5th, 1985. Welcome to Alabama International Motor Speedway, in Talladega. One of NASCAR’s most epic finishes would unfold before a packed stadium of racing faithful.

Bill Elliott would come back from an astonishing 5-mile deficit to capture victory lane. Improbable? Try impossible by most standards. Yet, moving up the pack involved drafting many cars in front to reduce drag and benefit from the leaders.

You can do the same, simply by picking the right spots in a prevailing trend. When you know what to look for, you can make your move and let the institutions drive price while you win. You’re just looking for the right candle.

What big hauls are most traders missing?

The race didn’t start out that well. With smoke billowing from under Elliott’s Ford, he had to take an unscheduled pit stop to make repairs to an oil fitting line. It occurred on lap 48 after he had already led for 25 laps. He was out of the race for an eternity – one minute and nine seconds. By all accounts he was done – put a fork in that race.

Every second, the race of the market and the profits that go with it are missed by retail traders. They make their entries, not realizing that they’re leaking oil and spewing smoke from the second they’re made. When the trade sputters and dies, either a slow death or a magnificent ball of flames – they wonder what happened.

This is because they can’t see the price levels at which the institutional traders are making their moves. When big positions are assumed, they have no idea that they’re being passed as if they’re standing still. And when attractive price levels are attacked, they might as well be riding a ten-speed trying to catch up.

What does VWAP tell me?

“I about kissed everything goodbye because I didn’t know what happened” Elliott said when asked about the smoke that sent him to pit row. It turns out they got it fixed faster than anyone imagined. He would go on to say that it was the ‘good Lord’ that helped him make up the laps he lost.

You can leave God out of it when you add VWAP to your chart. When institutions have to fill mammoth orders for a client, they want to get the best price possible. VWAP will tell you the standard deviation – or the price levels one or two places removed from the Volume Weighted Average Price. It’s at these levels that you’ll see consistent buying and selling activity as the institutions either buy or sell their positions at bargain prices.

When an institution spots a bargain and moves, you want to duck right in behind and draft that activity. This is because they’re the ones at the wheel driving the volume – the retail trader is strapped into the back seat trying not to spill his or her coffee.

Notice the VWAP levels using the CL as an example. Price respects each of the standard deviation levels with a great deal of consistency. When price ventures up, or down – away from the Volume Weighted Average – there’s action at each of those levels. These are the institutions putting their foot on the gas either unloading or picking up big portions of a position.

Now that you know the levels to watch, you can layer in Order Flow Sequence Tracking too.

How can I use VWAP to manage high-probability entries and exits?

In climbing his way back through the pack, Elliot had the benefit of a very fast car, God of course, and the cars ahead of him to reduce drag. He’d later go on to say that he had some dirt in his eyes, so he drove with them almost shut for most of the race – which made him feel right at home.

Using Order Flow Sequence Tracking, you can draft the institutions with your eyes wide open. As price leaves VWAP and approaches any of the standard deviation levels – you have the makings for a reversal that you can stalk. When it reaches these levels, watch for Sequential Decline – buyers or sellers backing off the direction they’ve been riding. Or look for Responsive Activity, the other side stepping in to drive price back the other direction.

When these conditions present themselves, you can ride with the institutions on the other side of the price level as they drive it back towards VWAP. Better yet, you can take it across VWAP to the standard deviation on the other side.

Note our same CL example. When price hit the standard deviation below, both Sequential Decline and Responsive activity surfaced. The entry would have been spot on and you could have drafted price right back to the other side of VWAP.

If you’re thinking that the deviation levels are nothing more than price fluctuation – all you need to do is look left. You’ll see how regularly they’re respected by price. Like any intermediate trade location – you’re not going to enter with this alone.

Order Flow Sequence Tracking tells you in real time if the institutions are in fact stepping in to drive price back – or continue to push it in that same direction. Without this intelligence, you’re driving blind – regardless of how reliable your level may be.

Also bear in mind that like Volume at Price, VWAP is dynamic – moving with price as the market finds its way for the day. Monitoring the deltas and imbalances will tell you if you can expect price – and by extension the VWAP – to explode. Intelligence you wouldn’t otherwise have without Order Flow Sequence Tracking.

Take the lead by drafting with the institutions

It was Cale Yarborough that gave the lead up to Elliott on Lap 145. It went down on the Alabama Gang Superstretch – a little patch of track that has settled more than one score. How’d he do it? He drafted and raced his way around the track a full second each lap faster than the rest of the pack.

Don’t give up the lead. Take it by getting in behind the institutions when they unload or assume positions at the price levels they like. Add VWAP to your chart and keep an eye on the standard deviations in both directions.

When price approaches, use Order Flow Sequence Tracking to confirm reversal conditions. As they surface, take your position behind the responding institutions as they hit the gas in the other direction. Ride your position to its target either right at VWAP or the deviation on the other side.

Draft your way to success, letting the institutions do the work in front of you.