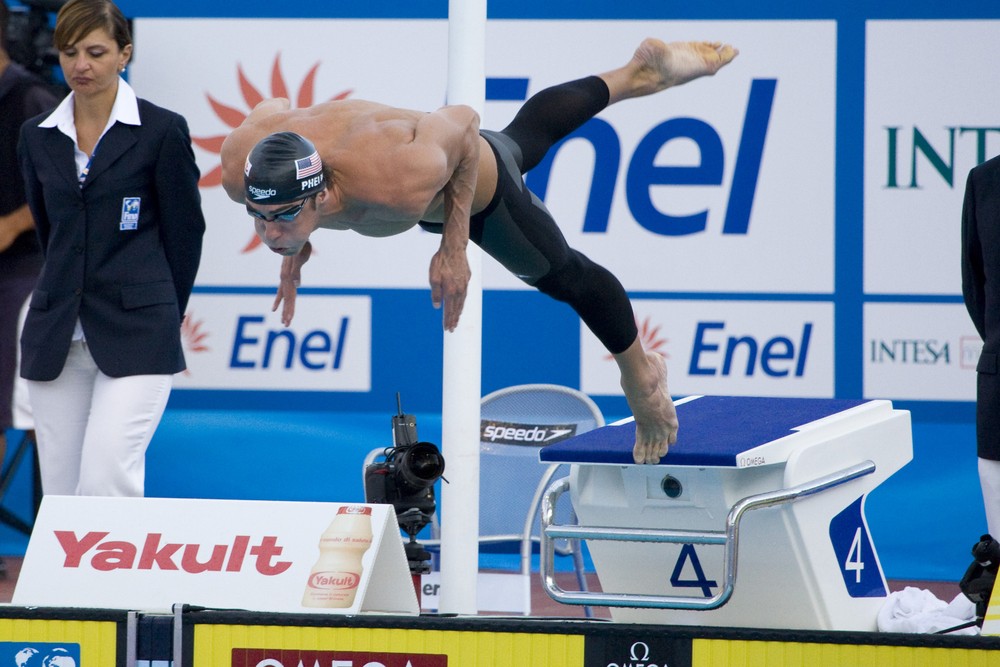 Choosing The Winning Lane Next To A Prevailing Trend

The Olympic Aquatics Center, Rio De Janeiro. It’s Tuesday night and the world’s best are taking their places on the starting blocks. Imagine being transported from your couch directly to lane four, next to Michael Phelps.

Doing your best to avoid gawking while hoping the world can’t see the pure terror spread across your face, you summon whatever will you have to form a game plan. You can take him on, head-to-head… uh, nope. Or you can tune out the distractions around you and simply draft him.

When trying to make the medal stand of profits, drafting with the overall (winning) trend is often the better part of valor. Even when presented with distracting interim rips or dips headed in the wrong direction, you can locate profitable entries that swim with the trend.

Winning with the trend by ignoring short-term distractions

Often you’ll hear about swimmers pacing themselves during the ‘first 50’, with the goal of conserving their energy for the final sprint. When they choose not to do this, the field eventually catches them, and the heat consolidates into a tight group again — despite the initial advance.

During prevailing trends, big continuations (rips or dips) are often followed by periods of consolidation and retracement. This is when the ‘field’, or the rest of the market, essentially catches up to deal with the new price level.

When this happens, even in the most heated of markets, it presents a chance for you to make your move — and draft with the trend. As long as you don’t fall for the interim ‘first 50’.

Places to tuck in and draft while minimizing risk

There’s been a fair amount of debate when it comes to the practice of drafting. Essentially, this involves tucking in behind or just beside the lead swimmer in the lane next to you to reduce the drag that you’re dealing with. With the lead swimmer taking on most of the headwind, you can swim faster while expending less energy.

When the market comes back to you with a retracement after a big move, your goal is to ‘tuck in’ with the trend. You can spot your opportunity using a simple Fibonacci retracement tool, or eyeballing the 50% mark.

Using the below ES example, you’ll see the initial surge, the responding retracement and then the entry point. Targeting the 50% point affords you the confirmation you need to ensure that the prevailing trend is still in control.

Drafting with an established leader at the head of the pack puts you in a position to make the final kick and land a place on the medal stand. Likewise, getting on board with a prevailing trend allows you to make a run on profits in the form of a position trade that can potentially run for days.

By entering on a retracement, you will have given yourself the luxury of confirmation — a vital component when dealing with a trend. While this takes the patience to ignore getting on board with short-term reversals, it puts you in a high probability position that you can consistently profit from.

Should the trend move against you in the event that the market rejects that price level, your exposure will be limited. A far better position to be in compared to those who may have tried to bet on the trend early on, without the benefit of any retracements — which will have likely stopped them out.

Interim rips or dips that run counter to the trend can be very attractive. Many scalp traders will prefer to take advantage of these, instead of trading with the larger trend.

Consider the exposure you face with multiple trades compared with one that has the potential to deliver as much — if not more — profit. Additionally, many of the interim swings take place within the consolidation value zone, a risky way to turn a profit given the volatility and the volume that’s taking place.

In bypassing interim rips or dips in favor of the larger trend you manage your risk, while positioning yourself for larger profit rewards. Often better to draft the winning trend, than exhaust your energy on the short-term distractions.

Don’t take on prevailing market trends when you can trade with them and profit. Take advantage of the distracting rips (or dips) to spot your entry as they lose steam. When you find your opening at the 50% retracement point, jump in and draft the trend to profits.

Take your place on the medal stand of profits, thankful there is a prevailing force clearing the way ahead of you.